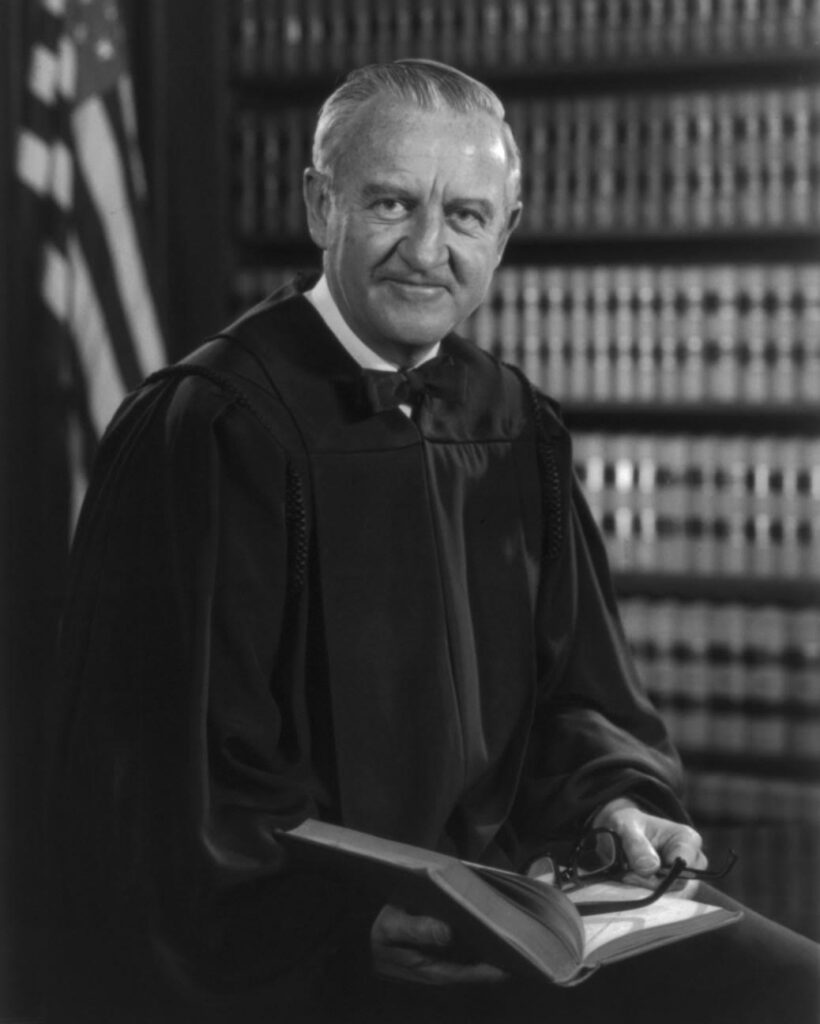 Justice John Paul Stevens was born in Chicago, Illinois, in 1920. He graduated from the University of Chicago in 1941 and then enlisted in the Navy.  For his exemplary service on a Navy code-breaking team, Justice Stevens earned the Bronze Star.  Following World War II, he entered Northwestern University Law School, where he became editor in chief of the school’s law review and graduated with the highest grades in the school’s history.

After law school, Justice Stevens worked as a law clerk to Justice Wiley Rutledge of the Supreme Court of the United States.  He then entered private practice in Chicago.  He returned to Washington in 1951 for one year as counsel to a congressional antitrust committee.  In the small law firm he co-founded in 1952, Justice Stevens developed further antitrust expertise and became a skilled litigator.

In 1969, he served as chief counsel for a special commission investigating a bribery scandal in the Illinois Supreme Court.  His widely praised performance in that role led to his appointment in 1970 to the U.S. Court of Appeals for the Seventh Circuit.

In 1975, President Gerald Ford named him to the U.S. Supreme Court.  First seen as a moderate on many issues, Justice Stevens emerged as a consistently independent thinker over the decades of his tenure on the Court.

“The self-evident proposition enshrined in the Declaration of Independence – the proposition that ‘all men are created equal’ – is not merely an aspect of social policy that judges are free to accept or reject; it is a matter of principle that is so firmly grounded in the traditions of our people that it is properly viewed as a component of the liberty protected by the Fifth Amendment.”

Join us in investing in the next generation of public interest & social justice lawyers.

This website uses cookies to improve your experience while you navigate through the website. Out of these, the cookies that are categorized as necessary are stored on your browser as they are essential for the working of basic functionalities of the website. We also use third-party cookies that help us analyze and understand how you use this website. These cookies will be stored in your browser only with your consent. You also have the option to opt-out of these cookies. But opting out of some of these cookies may affect your browsing experience.
Necessary Always Enabled
Necessary cookies are absolutely essential for the website to function properly. These cookies ensure basic functionalities and security features of the website, anonymously.
Functional
Functional cookies help to perform certain functionalities like sharing the content of the website on social media platforms, collect feedbacks, and other third-party features.
Performance
Performance cookies are used to understand and analyze the key performance indexes of the website which helps in delivering a better user experience for the visitors.
Analytics
Analytical cookies are used to understand how visitors interact with the website. These cookies help provide information on metrics the number of visitors, bounce rate, traffic source, etc.
Advertisement
Advertisement cookies are used to provide visitors with relevant ads and marketing campaigns. These cookies track visitors across websites and collect information to provide customized ads.
Others
Other uncategorized cookies are those that are being analyzed and have not been classified into a category as yet.
SAVE & ACCEPT